Historically, naturalists first categorized mushrooms as a type of mysterious plant that didn’t need sunlight and could grow almost miraculously overnight. Until recently, most mycological research was housed within botany departments and many terms used for mushrooms are borrowed from botany, such as “rhizomorph,” “stem,” “germinate,” “vegetative,” and “fruit body.”

Over the years, researchers realized how different mushrooms were from plants, and in 1969 scientists elevated mushrooms to their own kingdom. The fungal kingdom is distinct from both plants and animals and is in fact more closely related to animals than plants. In some ways, this history is symbolic of how little we know about fungi and how young the field of modern mycology is. That mushroom you find in the woods might be new to science, and we’re still figuring out how to cultivate the vast majority of edible mushroom species.

Fungi vs. Plants vs. Animals

Fungi, plants and animals are all organisms classified as eukaryotes, meaning their genetic information is stored in a membrane-bound nucleus within their cells. The three kingdoms can be compared based on their cell structure, method of obtaining food, and life cycle and reproductive strategies. In response to stimuli, fungi and animals have more in common than plants as they can move through their environment while plants, being generally fixed to one location, must physically grow in order to move through it. 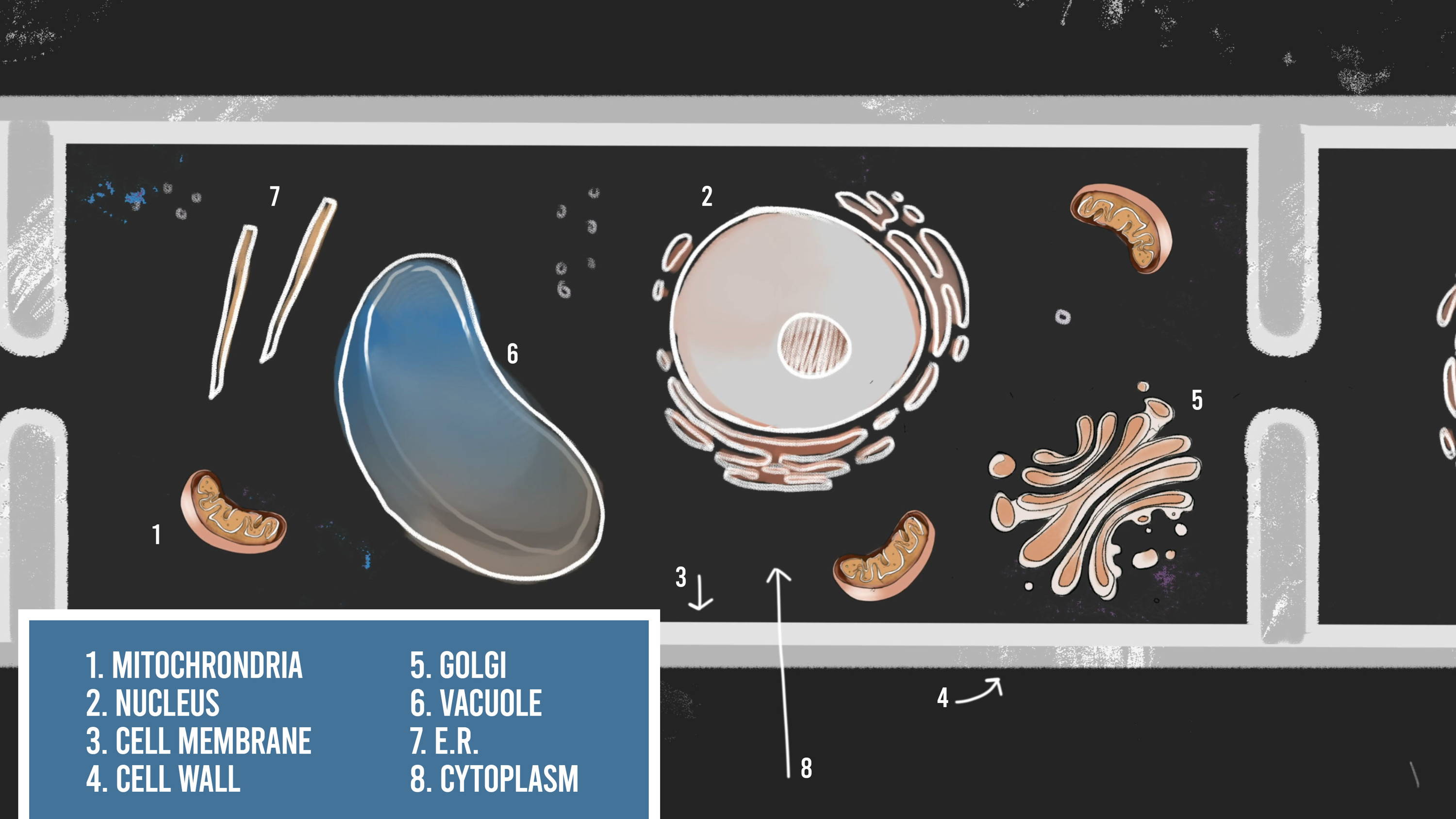 Fungal cells are like plant and animal cells in that they have a nucleus, cell membrane, cytoplasm and mitochondria. See Fig. 1. The boundary between individual fungal cells is called a septum, with some species having very complex septa, and others having simple or no septation at all. Fungal cell walls are made of chitin, a fibrous substance also found in the hard shells of insects and crustaceans. Plant cell walls are made of cellulose, a tough and rigid substance that is water insoluble and slow to break down. See Fig. 2. Animal cells lack a cell wall completely but are surrounded by a thin cell membrane and require a support structure such as a skeletal system, exoskeleton, or shell to hold them together. 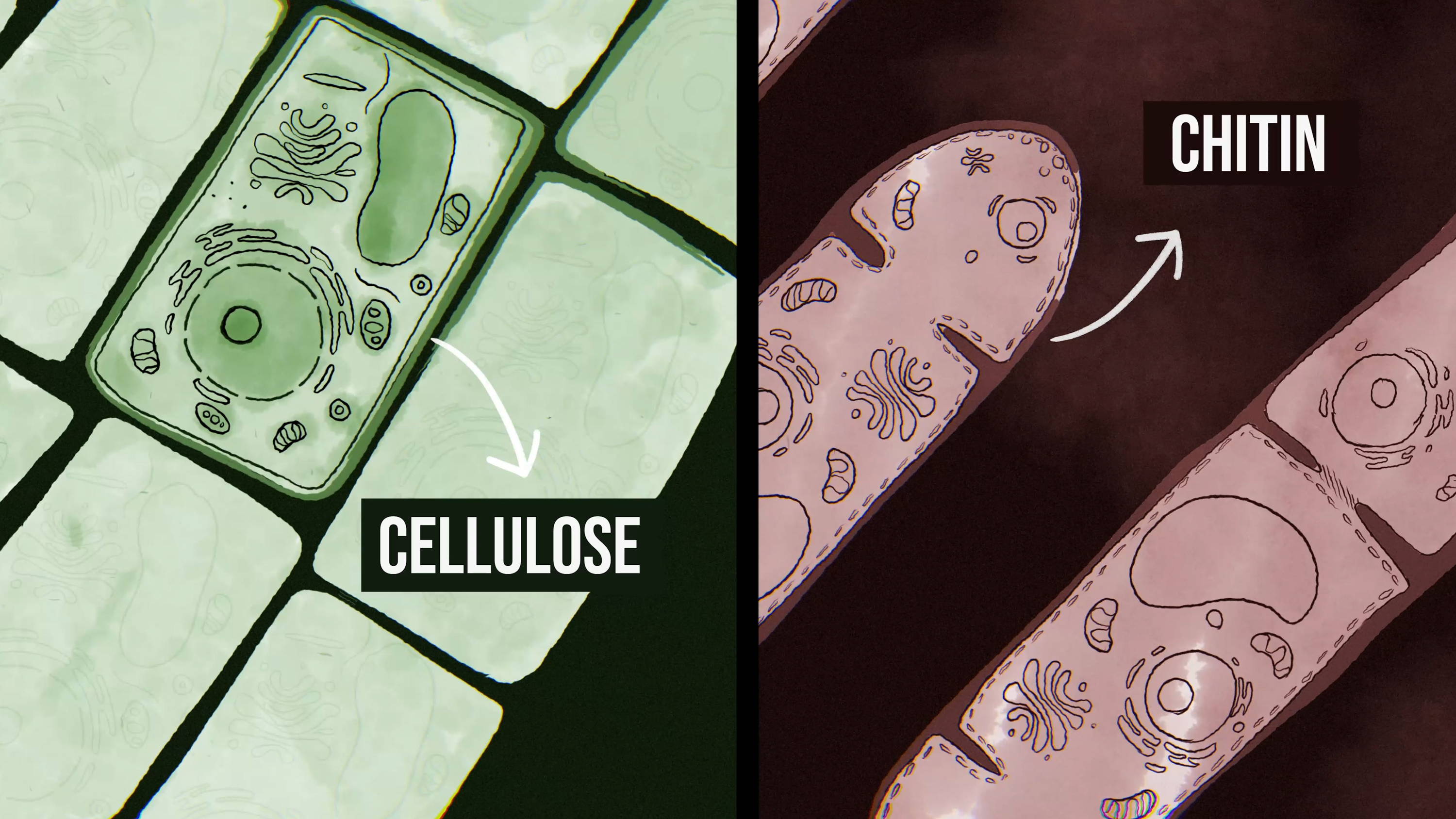 Plant cells contain specialized organelles called chloroplasts which collect energy from the sun to create sugar in a process called photosynthesis. This allows plants to produce their own energy, making them autotrophic. Both fungi and animals lack chloroplasts, though some species may incorporate photosynthetic green algae or cyanobacteria into their bodies to help obtain energy. Generally speaking however, animals and fungi lack the ability to make their own food and must consume other organisms to obtain their energy. This is called being heterotrophic.

While both fungi and animals are heterotrophic, animals ingest other organisms then digest them, meaning they bring the food into their body before digestion. Fungi, on the other hand, digest and then ingest their food by growing through it, secreting digestive enzymes outside of their bodies, and absorbing the digested compounds and nutrients.

Fungi, plants and animals are embedded in a complex global food web of predator and prey relationships. While most fungi are saprophytic (get their energy by the consumption of dead or decaying organic matter), predatory and parasitic fungi also exist and can harm other species of fungi, plants, and animals. As an example, some mushrooms secrete adhesive compounds in order to catch nematodes on which to feed.

The three kingdoms can be separated by their life cycles and reproduction. Animals and plants can reproduce both sexually, through the fusion of a sperm and egg, and asexually through budding and vegetative reproduction off a single parent. Among fungi, there are no male and female individuals nor are there eggs and sperm. Different mating types and compatible strains find each other and fuse to create new individual fungi. An alternation of generations exists within the fungal life cycle allowing for the existence of individuals with half the genetic information required to create a new individual. Another attribute of fungi is that they produce spores. These are single cells that are often dispersed through the air (though not always) and are capable of growing into an individual without the need for fusion. Animals don’t use spores and only some varieties of plants, such as ferns, produce spores for dispersal.

Fungi in the Environment 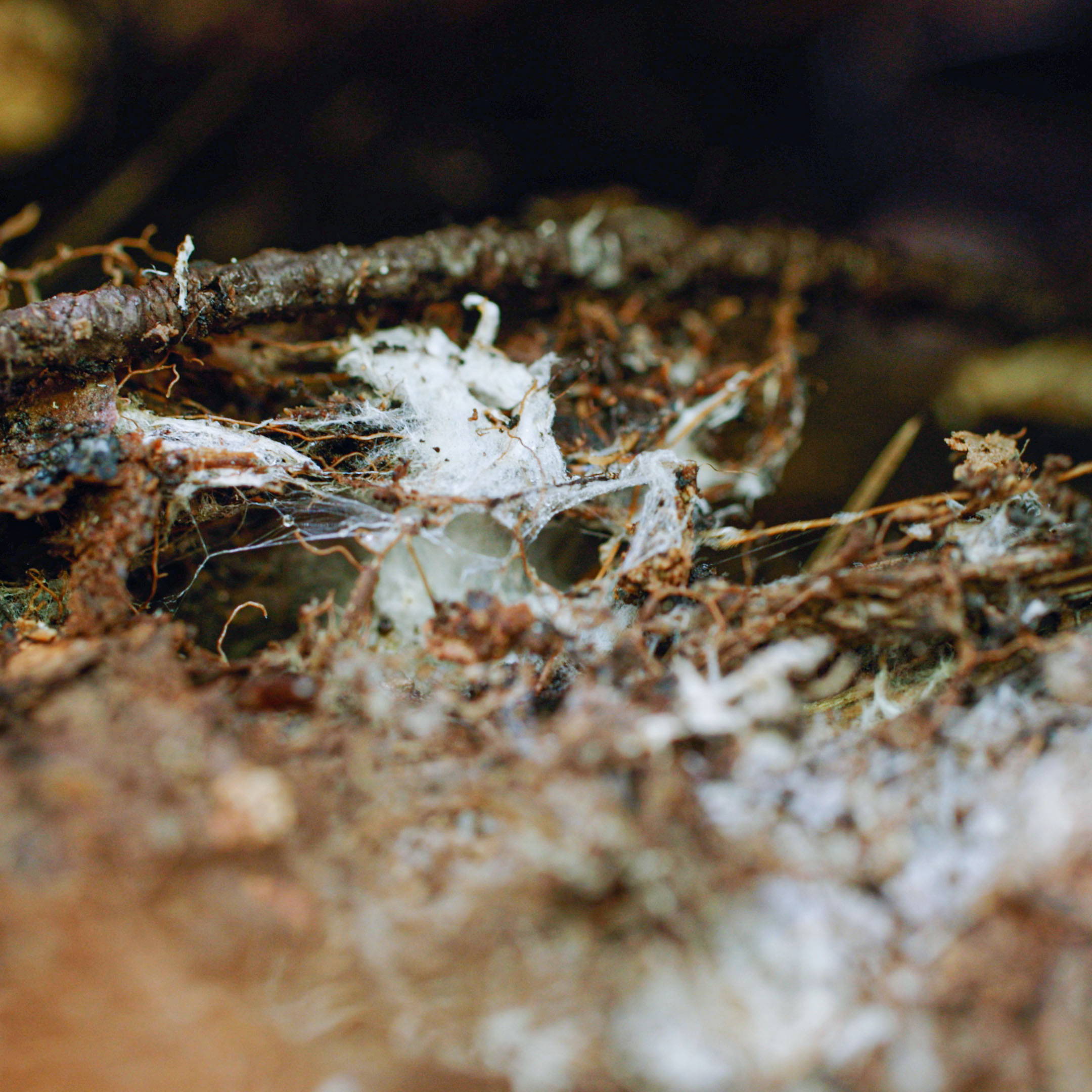 Fungi exist in the environment as a network of interconnected, thread-like cells known individually as hypha, plural as hyphae, and collectively as mycelium. See Fig. 3. This diffuse structure grows throughout the mushroom's food source, all the while secreting digestive enzymes that break down the material and allow the mycelium to absorb the unlocked nutrients. This ability of hyphae to grow through material in conjunction with the fact that fungi don’t require sunlight to grow allows them to be omnipresent, inhabiting a wide range of ecological niches. Fungi exist in nearly every terrestrial and aquatic habitat on Earth, and play critical roles in the ecology of diverse ecosystems, from deserts to coral reefs. Many are considered culinary delicacies or are integral to our food systems while countless others are considered harmful and can cause poisonings, parasitic infections, and allergies.

As decomposers, fungi play a pivotal role in nutrient cycling, especially in terrestrial ecosystems where many of the habitats we have today would not exist without fungi. Numerous species form intimate relationships with other organisms, such as mycorrhizal or endophytic fungi which are found in close association with between 80 and 90 percent of all green plants on Earth. Fungal pathogens can also have profound negative impacts on ecosystems with many recent species die-offs resulting from fungi, such as chestnut blight, white nose syndrome in bats, and chytridiomycosis in frogs. See Fig. 4. This huge range of diversity is all possible because of the unique attributes of fungal hyphae. 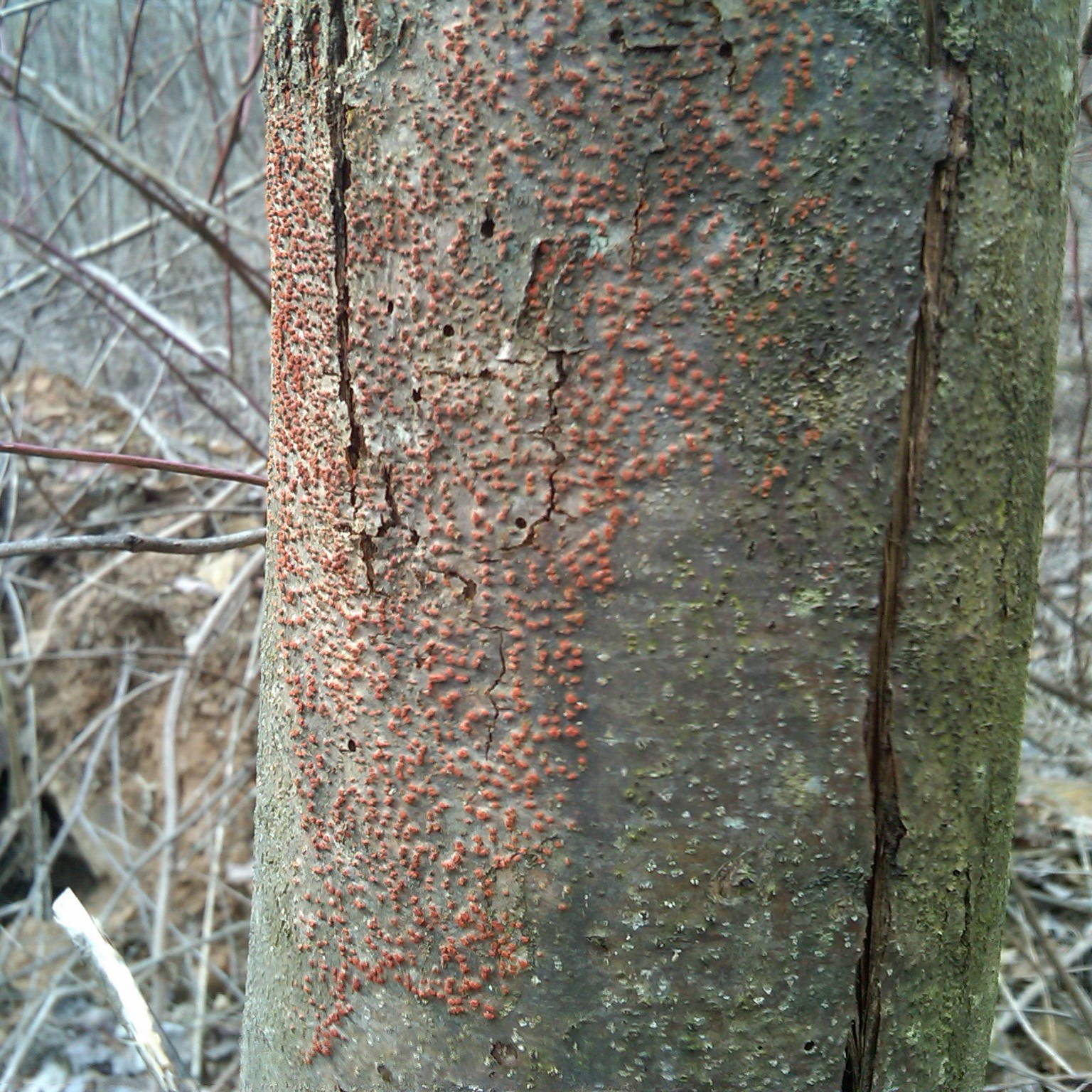 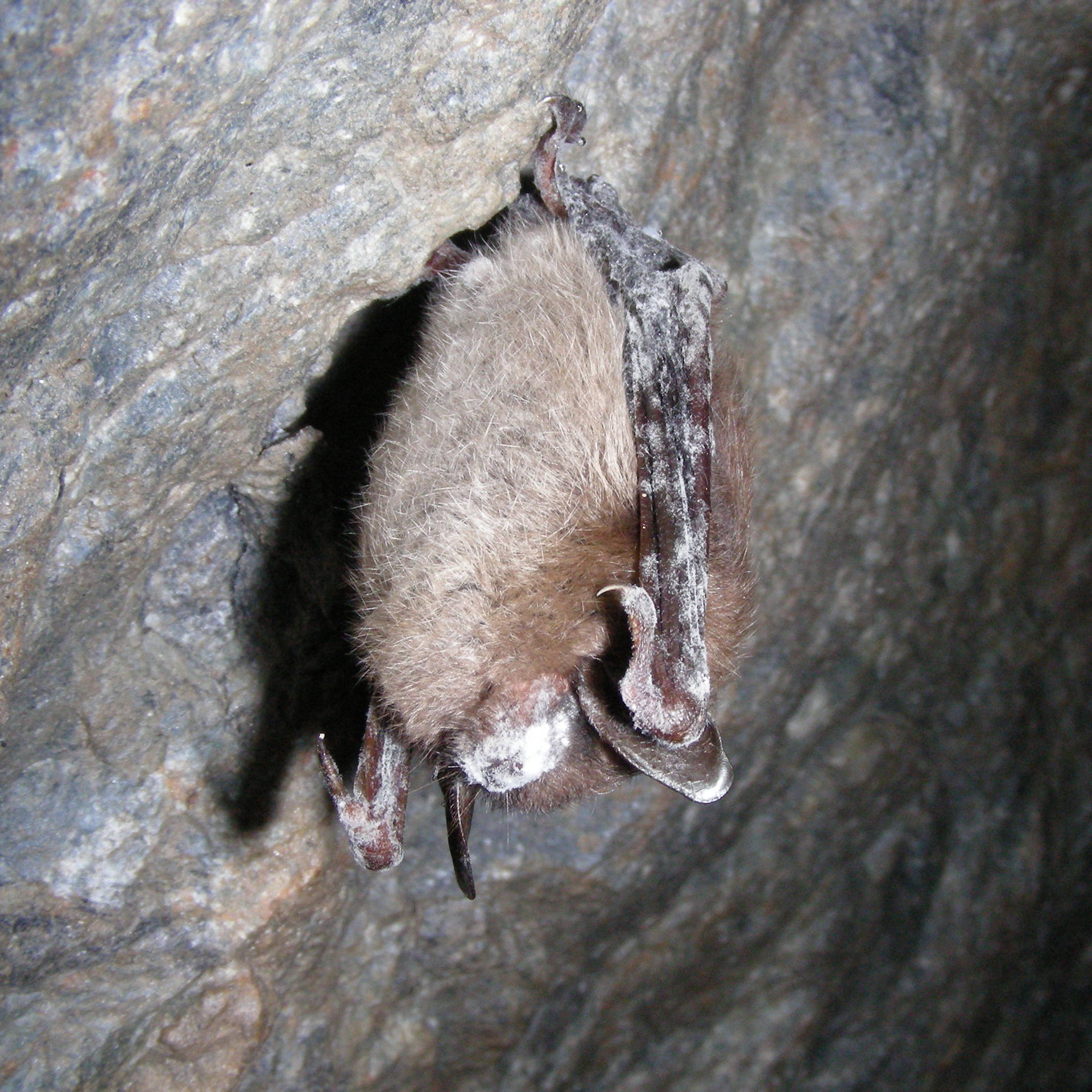 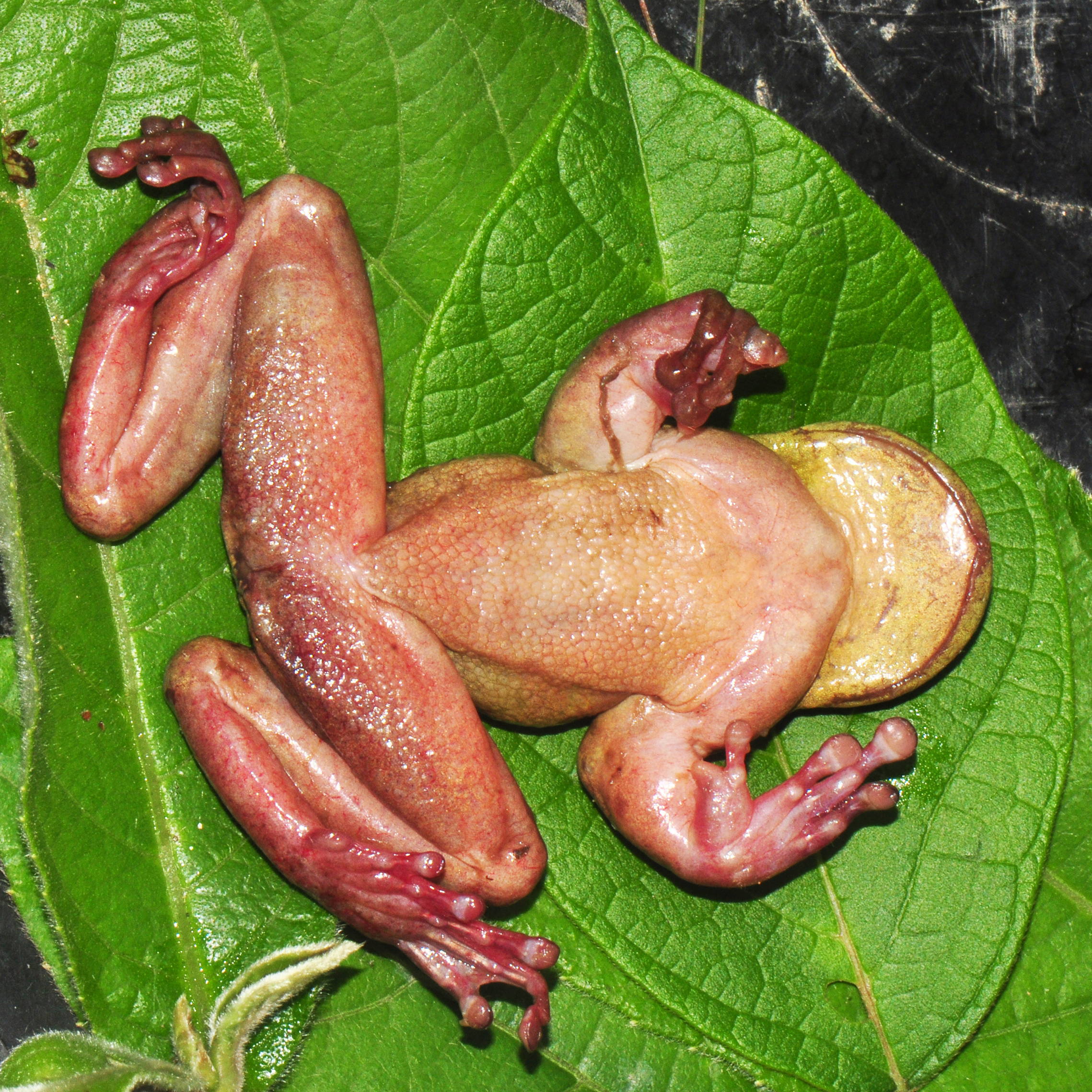 Fungal hyphae have many of the same structures as plant and animal cells, including a cytoplasm; the gelatinous liquid that fills the inside of a cell, a cell membrane; the semi-permeable structure regulating the flow of contents in and out of the cell, the mitochondria producing the majority of cellular energy, the golgi apparatus that facilitates the packaging and movement of cell contents and enzymes, and the nucleus which houses the cell’s genetic material. Unique to fungal cells is a dense cluster of vesicles at the tip of the growing hyphae called the Spitzenkörper, German for “pointed body.” As the hypha grows, vesicles migrate towards the tip, fusing with the cell membrane and releasing digestive enzymes into the surrounding environment. This repeated process of depositing enzymes into the environment, adding membrane to the hyphal tip and creating space ahead of the growing hypha gives the mycelium its unique ability to move through its food, digesting outside of itself then bringing the digested contents back inside. See Fig. 5.

Fig. 5: As the hypha grows, vesicles migrate towards the tip, fusing with the cell membrane and releasing digestive enzymes into the surrounding environment.

A life cycle is defined as a series of changes a species undergoes as it passes through the beginning of life towards the reproduction of the next generation. Fungi are unique and complex in this respect, as they have the ability to alternate between organisms with varying genetic material. The familiar Shiitake mushroom (Lentinula edodes) can be a useful model for basic reproductive anatomy of a species within the Basidiomycota, the group containing the majority of large, fleshy fungi. See Fig. 6. As a reminder, the Shiitake portion of the life cycle is analogous to an apple on an apple tree. The purpose of an apple is to spread seeds and create the next generation but the main part of the life cycle that continues growing year after year is the tree itself. Similarly in fungi, the Shiitake mushroom itself has the sole purpose of making and dispersing spores while the predominant part of the life cycle that grows year after year is the mycelium. 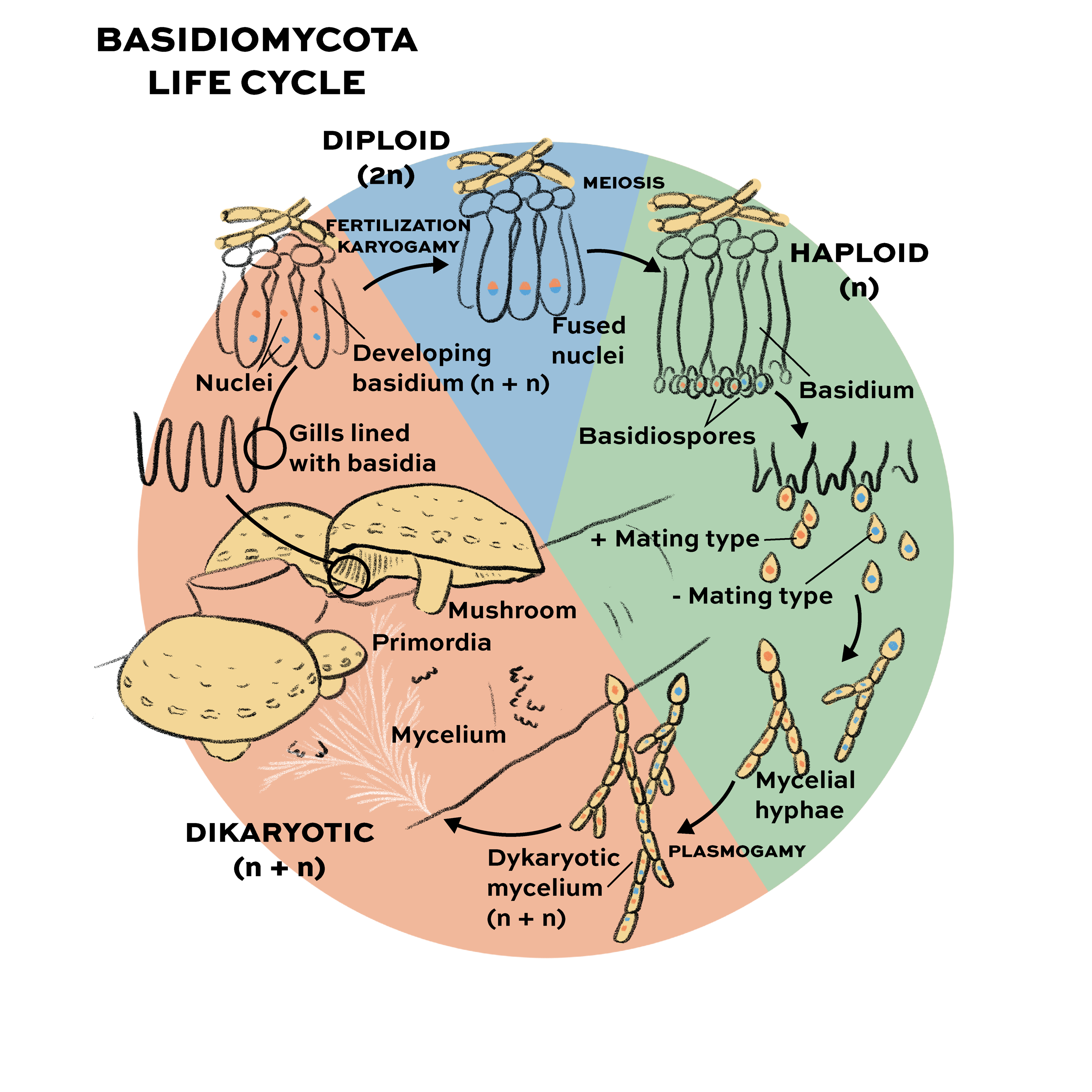 The top of the mushroom is called the cap, or pileus and is supported by the stem, or stipe. On the underside of the cap is found the spore-bearing surface of the mushroom, called the hymenium. Shiitakes have gills, while other species have pores, teeth, or are smooth but all function to increase the surface area on which the spores can be produced. A single mushroom can generate as many as a billion spores each day with some species ejecting spores at a record breaking velocity of 1.8 million meters per second. With a range of methods, the end result is the same: release spores into the environment which then germinate and find a suitable mate with which to begin the process over again.

At this stage of its life cycle, the countless Shiitake spores and the hyphae they produce are considered haploid and monokaryotic, meaning they contain half the genetic material required to complete their life cycle. This is the shortest stage and lasts a week or two. Once a suitable partner is encountered, the two haploid hyphae fuse to create a dikaryotic mycelium or dikaryon that now has all the genetic material required to produce a mushroom. This stage of the life cycle is unique to fungi because even though the cell contents fuse, the nuclei do not, and remain separated within their fused cytoplasm. Once the dikaryon has amassed enough nutrients and the environmental conditions are right, it will produce mushroom fruiting bodies in order to release spores.

Along the hymenium, or the spore-bearing gills of the Shiitake mushroom, each strand of mycelium terminates in a specialized cell called a basidium. It is in this cell where the two, separated nuclei fuse to produce a diploid zygote, which then immediately divides into four new haploid spores that are then released into the surrounding environment. It is interesting to note that in most fungi the zygote is the only cell in the entire life cycle that is diploid, whereas many animals, including humans spend their entire life cycle as a diploid organism.

It’s our hope that this foundational knowledge on the history of mycology, how fungi differ from other kingdoms, the unique structure of fungal hyphae and the life cycle of fungi are just the beginning of your mycological pursuits. In future articles we’ll detail other unique aspects of fungal biology, ecology, cultivation and chemistry so stay tuned to our blog and newsletter for more information.