What does Amanita muscaria have to do with Christmas?

Written by Will Broussard & Illustrated by Brit Weatherbee 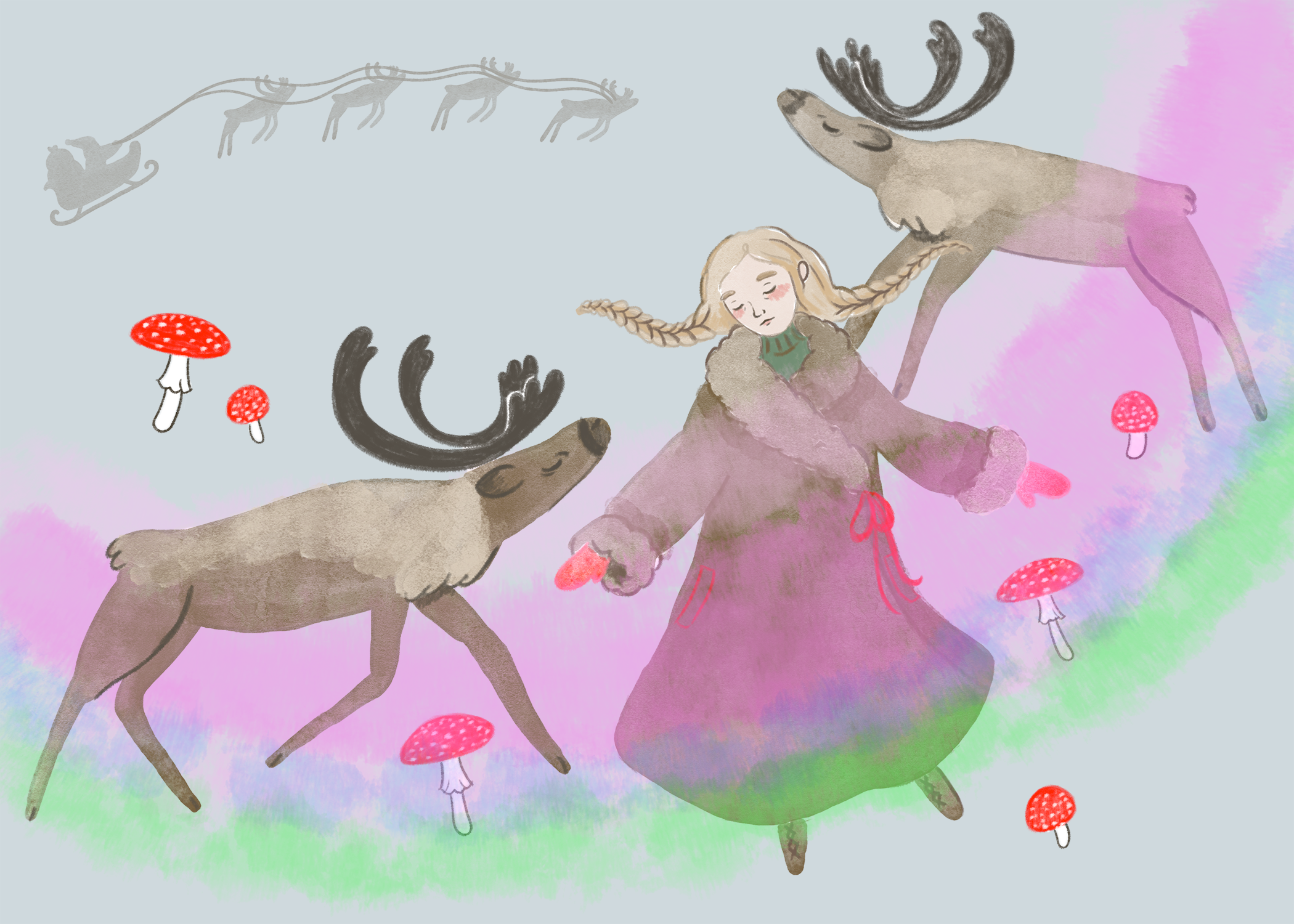 The psychedelic flight versus Santa's flight

Amanita muscaria, also known as the Fly Agaric, is the archetypical toadstool of our cultural imagination. The humble red and white mushroom of Nintendo’s Mario universe, the literal mushroom emoji whose rotund figure graces children’s books, vintage greeting cards, folk art and modern fashion also threads itself through stories, legends and nightmares going back centuries. In fact, the mushrooms’ traditional use as an entheogen (a psychoactive substance used for religious or spiritual purposes) throughout Eurasia is well documented and has been hypothesized to be responsible for key aspects of our modern Christmas tradition, including ornaments, flying reindeer, and even Santa Claus himself arriving via chimney with gifts wrapped in red and white. Is this truly the case? We discuss what we know about traditional Amanita muscaria use and how it may or may not be responsible for countless familiar Christmas customs.

With its showy red and white pattern, a 3–8-inch diameter cap and stem up to a foot tall, the Amanita muscaria may well be the easiest mushroom to identify. The young fruiting body is covered in a white universal veil, which separates and breaks into smaller white flakes or warts as the mushroom elongates and matures. The gills of this basidiomycete are free and white, which match the white spore print. Cosmopolitan in distribution, the species is found on all continents except Antarctica and is introduced and considered invasive throughout the southern hemisphere including in New Zealand, Tasmania, and Australia. Several variants, subspecies, and recently identified full species exist, including the American Fly Agaric (subsp. flavivolvata), the Yellow-orange Fly Agaric (var. guessowii), the Peach-colored Fly Agaric (A. persicinia), the White Fly Agaric (A. alba), and the Royal Fly Agaric (A. regalis). The type species, Amanita muscaria var. muscaria, the Common Fly Agaric, is the well-known variety native to Europe and Asia with limited occurrence in Alaska. The species is ectomycorrhizal, forming complex associations with a range of hardwood and softwood tree species including birch, pine, and spruce by enveloping tree roots with its hyphal network, scavenging water and nutrients from the soil in exchange for sugars produced through photosynthesis. 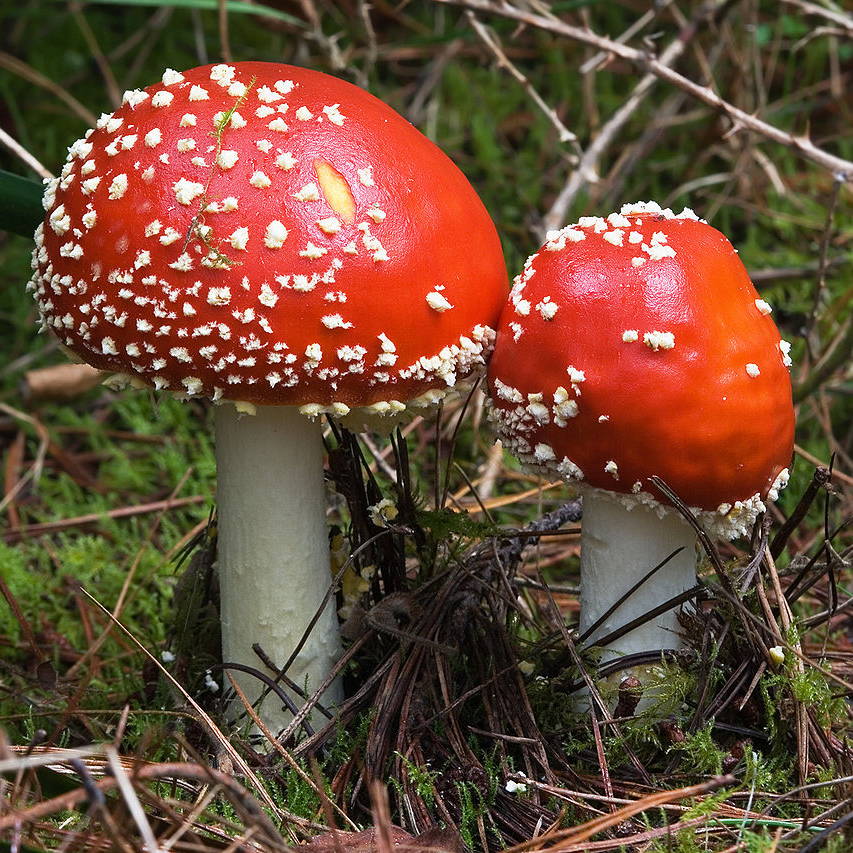 The common name Fly Agaric points to its intoxicating qualities. Once used as an insecticide in Europe, dried caps were crumbled into milk to attract house flies which became drunk and easier to dispatch. The chemicals behind these effects are the psychoactive chemicals ibotenic acid and muscimol, toxins which also give the mushroom its entheogenic abilities. A range of symptoms appear within 30 minutes to 2 hours of ingestion of as little as 5 grams or a single cap, and can include drowsiness, nausea, vomiting and sweating along with distorted sight and sounds, euphoria, dizziness, and convulsions lasting between 4 and 10 hours. Though effects are highly variable from person to person and from mushroom to mushroom, deaths are rare, and none have been reported in the last century. It is important to note that numerous relatives in the Amanita genus contain deadly amatoxins, including the Destroying Angels (A. bisporigera and A. ocreata in North America and A. virosa in Europe), Panther Cap (A. pantherina) and Death Cap (A. phalloides) and their ingestion can lead to liver and kidney failure within a week.

Hallucinogenic mushrooms have been part of human history for thousands of years, with some of the first pictographic evidence being the cave drawings at Tassili n’Ajjer in Algeria, depicting dancing human figures holding mushrooms in their hands, dating to between 9500-7000 BC. Pictographs of mushrooms appear at the Selva Pascuala mural in eastern Spain dating to 6000 BC. Part-human, part-mushroom shaped petroglyphs dating to the first millennium BC were found above the arctic circle along the Pegtymel River in northeastern Russia and an analysis of several indigenous Siberian languages confirm that words meaning “ecstasy”, “intoxication” and “drunkenness” are traceable to words representing Amanita muscaria. 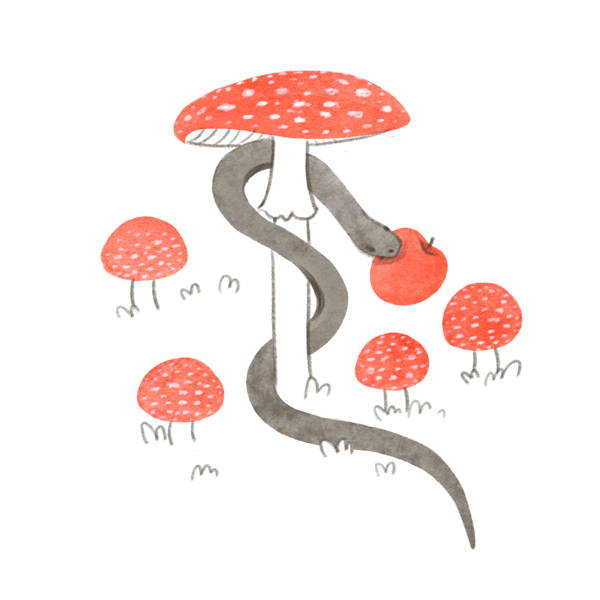 Theories linking Amanita muscaria to various ancient mystical and cultural institutions abound, from the ancient Vedic Indo-Aryan plant-derived drink ‘Soma’ and its Persian counterpart ‘Haoma’ (1500 - 600 BC) to the Kykeōn initiation ritual during the Eleusinian Mysteries in Greece (1450 BC to 400 CE). It has been suggested that the Viking berserker gangs (900 - 1200 CE) consumed Amanita muscaria to attain their trance-like fury in battle. The idea that the mushroom could intoxicate house flies can be traced back to 13th century German philosopher Albert Magnus, who in his treatise De Vegetalibus, called it the "mushroom of flies" (giving significance to the name Fly Agaric). A mural painted in 1290 in Plaincourault Chapel in France appears to show Adam and Eve in the Garden of Eden with a serpent coiled around a giant Amanita muscaria, fueling the theory that early Christianity incorporated the use of hallucinogenic plants.

Though numerous theories connecting the Amanita muscaria mushroom to various historical events and traditions exist, its historical use as an entheogen by indigenous societies in northern Eurasia has helped fuel the idea that the mushroom played an outsized role in the roots of our modern Christmas tradition.

Accounts of A. muscaria use in Siberia (1736-present)

Accounts of A. muscaria use in Siberia (1736-present)

First-hand accounts of Amanita muscaria use for entheogenic purposes date to the 18th century with a translated journal published in English in 1736. While in a Siberian labor camp, Swedish colonel Philip Johan von Strahlenberg observed its use among the local Koryak people as an intoxicating tea, noting those who could not afford to gather the mushroom themselves resorted to drinking the urine of those who had done so, and in so doing could prolong the psychoactive effects for up to 4 or 5 cycles of ingestion and excretion. The mushrooms’ ability to impart intoxication after passing through the body was noted by German zoologist and explorer Georg Wilhelm Steller while exploring Kamchatka in the early 1740s. He observed Koryak people becoming intoxicated on reindeer meat who had themselves dined on the mushroom. Russian explorer Stephan Krasheninnikov further documented the intoxicating qualities of the mushroom in a report on the Kamchatka region in 1755, noting the “shaking of extremities, as if in a fever” along with visions, dancing, crying, feelings of lightness, joy, courage, and energetic well-being. 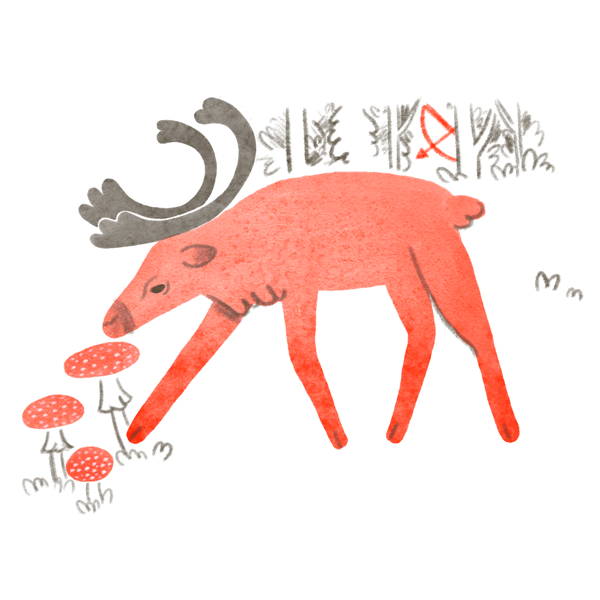 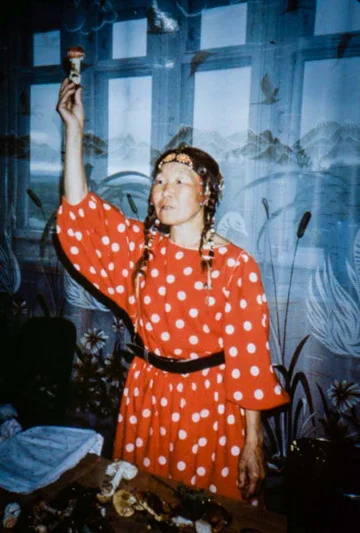 Accounts published throughout the mid to late 1800s by physicians, surveyors, and explorers noted the care taken in harvesting the mushroom, its preservation for wintertime use, and the great value placed on it by indigenous society for entheogenic purposes. Village shaman would take the mushroom to help answer questions about illness and interpersonal relationships, to visit ancestors and to predict the future, bringing “gifts” to the community in the form of wisdom. From time to time these shamans would dress up in red and white outfits especially during the collection process and while dispensing the mushroom to others for divination throughout the long winter. As recently as 1967 however, author and ethnomycologist R. Gordon Wasson, who originated the idea that Amanita muscaria was the psychoactive component in Soma, noted its declining influence throughout Siberia with the introduction of alcohol and the mushroom’s prohibition by the Soviet government. 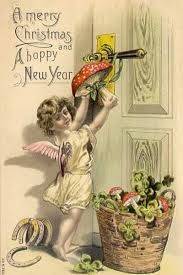 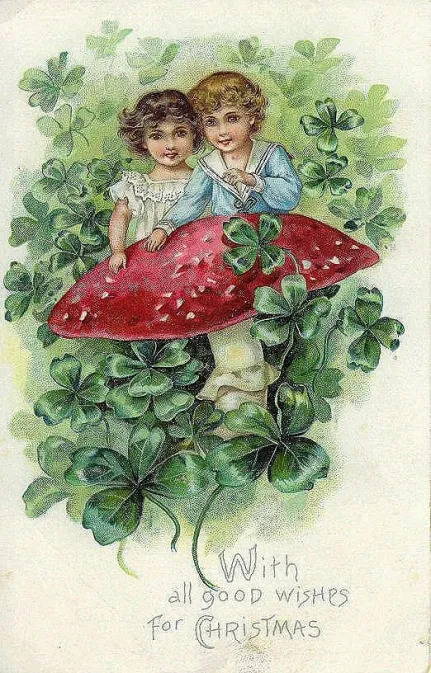 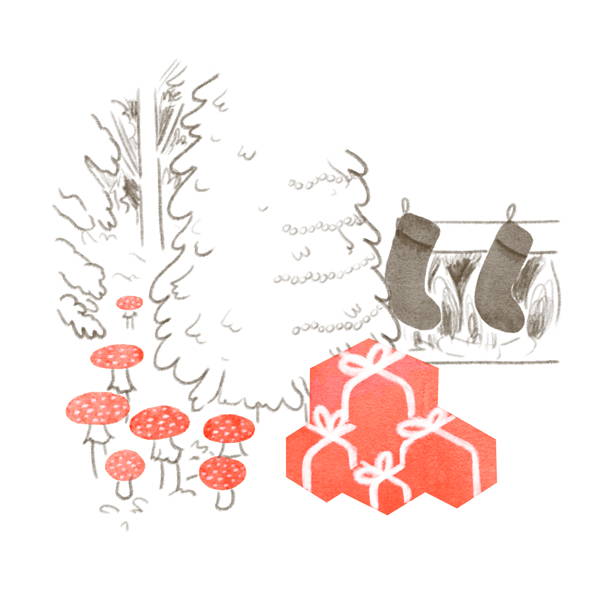 Ethnobotanist Jonathon Ott first made the link between Amanita muscaria and various Christmas motifs in 1976, connecting among other things Santa Claus’ home at the North Pole and his unique red and white suit to the natural dwelling place of the Amanita muscaria mushroom. Ott theorized Siberian shamans distributing Amanita muscaria to villagers in wintertime must have done so via the smokehole of their yurts, and that mushrooms would then be placed in stockings to dry over the fireplace. This story, he argues, has obvious connections to Santa’s own entry into the home via the chimney with his attendant bag of gifts. Critics point out the modern red and white suit of Santa Claus is a relatively recent addition to the Christmas mythology and is an artifact originating in the 19th century. Furthermore, they argue the importance of stockings and chimneys is related to the kind acts of Saint Nicholas, the Greek bishop from the 4th century who most people believe is the original Santa Claus.

Carl Ruck, a professor of classics at Boston University, points to the relationship between the apparent magical flight undertaken by shamans during ecstatic experiences under the influence of the mushroom and Santa Claus’ annual flight around the world. Ruck and Ott draw support from literature showing that both people and reindeer were drawn to the mushroom and became intoxicated, leading to the illusion of flight in both instances. Author James Arthur in Mushrooms and Mankind: The Impact of Mushrooms on Human Consciousness and Religion (2003) argues that the decorated Christmas tree and gifts wrapped in red and white placed below it are themselves symbols of the symbiosis between the conifer and the Amanita muscaria mushroom. Sierra College anthropologist John Rush believes the legend of Santa Claus evolved from a historical shamanic figure predating the typical origin stories of Saint Nicholas the 4th century bishop and the poem, “A Visit from St. Nicholas” by Clement Clark Moore from 1823.

Writer and mycologist Lawrence Millman posits that the modern Christmas myth originates in Arctic Scandinavia with the Sámi indigenous people. While their traditional use of Amanita muscaria is lost to history, he tells of the belief that shamans using the mushroom grew to resemble it, supporting the Santa-Claus-as-shaman theory. Citing as further evidence is the use of reindeer-drawn sleds in this part of the world, a mode of transportation that is absent in Siberia, but the image he relates of shamans harvesting, drying, and giving gifts of Amanita muscaria on the winter solstice echoes the story told by Ott. One interesting detail however is that Millman claims shamans were often rewarded for their gifts with food, which echoes the modern act of leaving milk and cookies out for Santa on Christmas Eve. 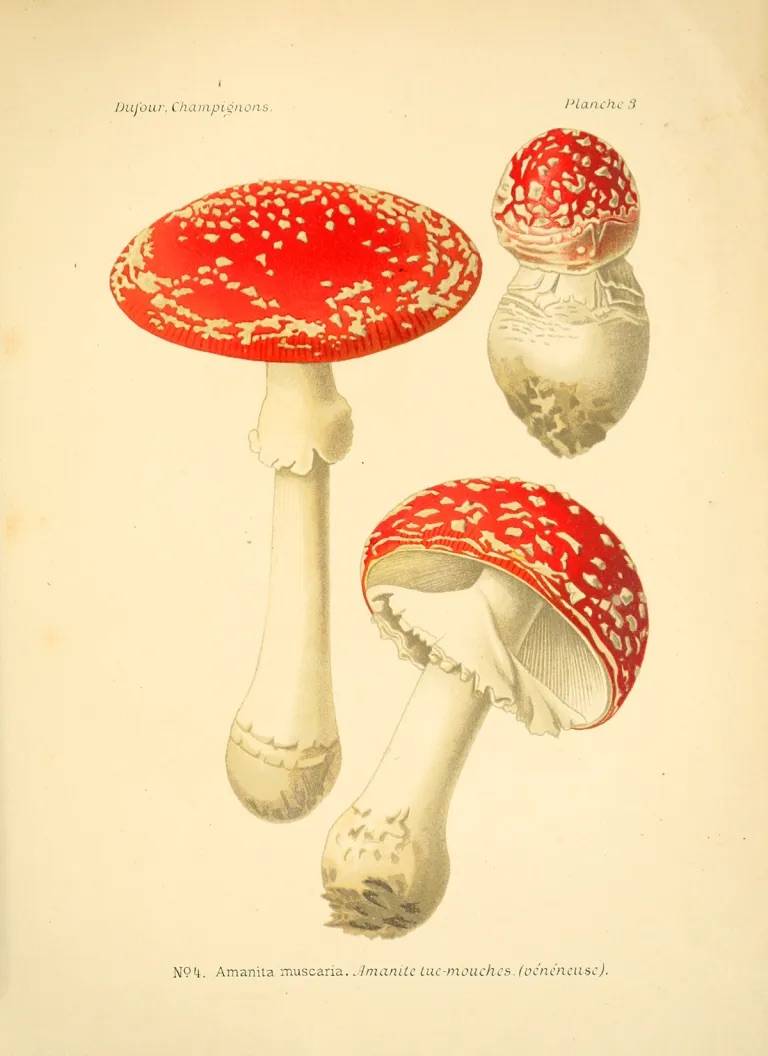 While many motifs related to the modern Christmas tradition stem from the 1823 poem, "A Visit from St. Nicholas" and credited to New Yorker Clement Clarke Moore, along with countless celebrations held in late December being among the oldest continually observed holidays surviving from ancient pagan, Christian, and secular customs, we cannot ignore the evidence presented here and elsewhere of a more ancient lineage, one steeped in shamanic tradition originating above the Arctic circle. We may never know the truth behind the Christmas tradition, but it is exciting to think that it just might involve a little red and white mushroom. 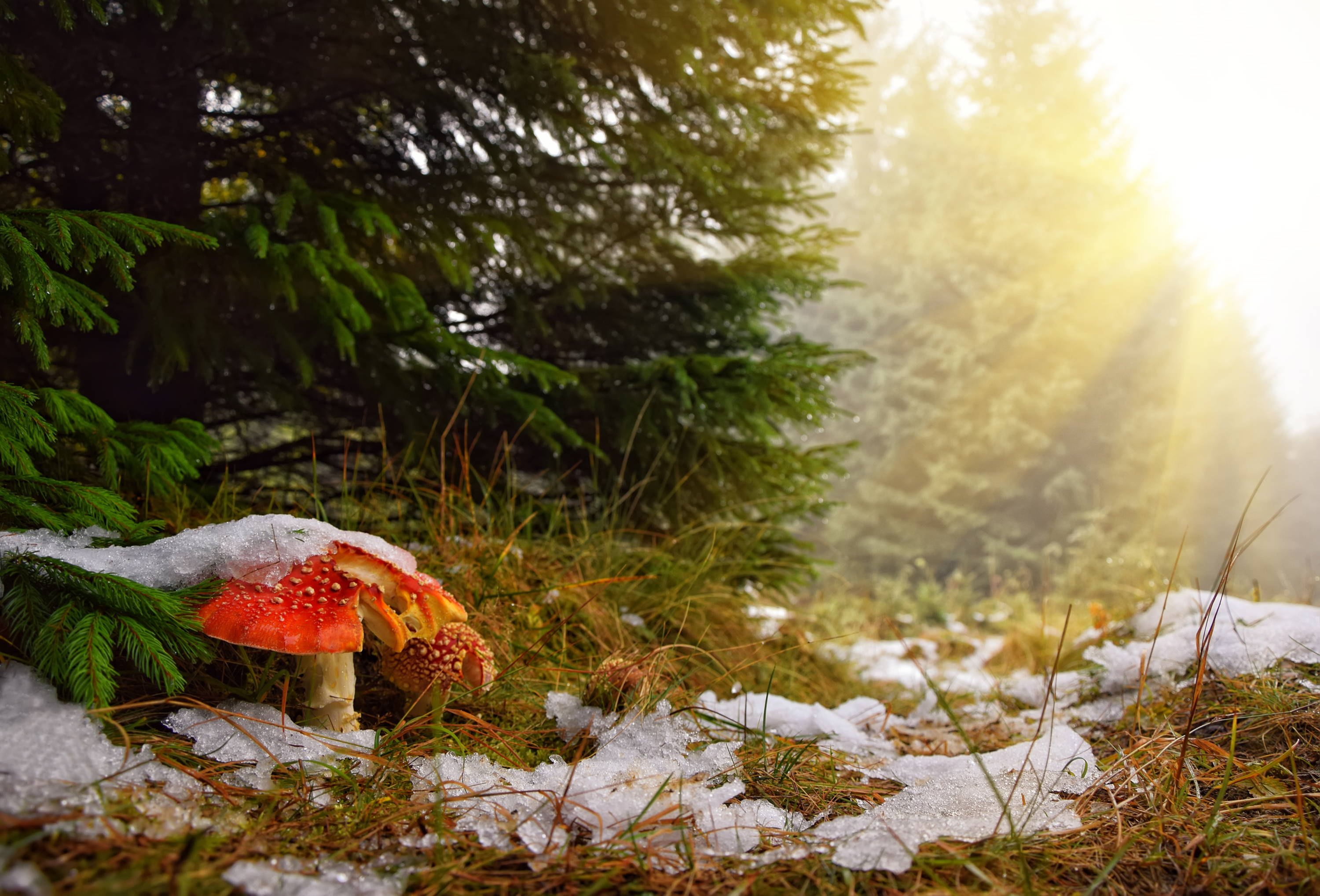 1 Reply to "What does Amanita muscaria have to do with Christmas?"