Can Fungi Be a Sustainable Meat Replacement?

By Allison Lucht & Will Broussard 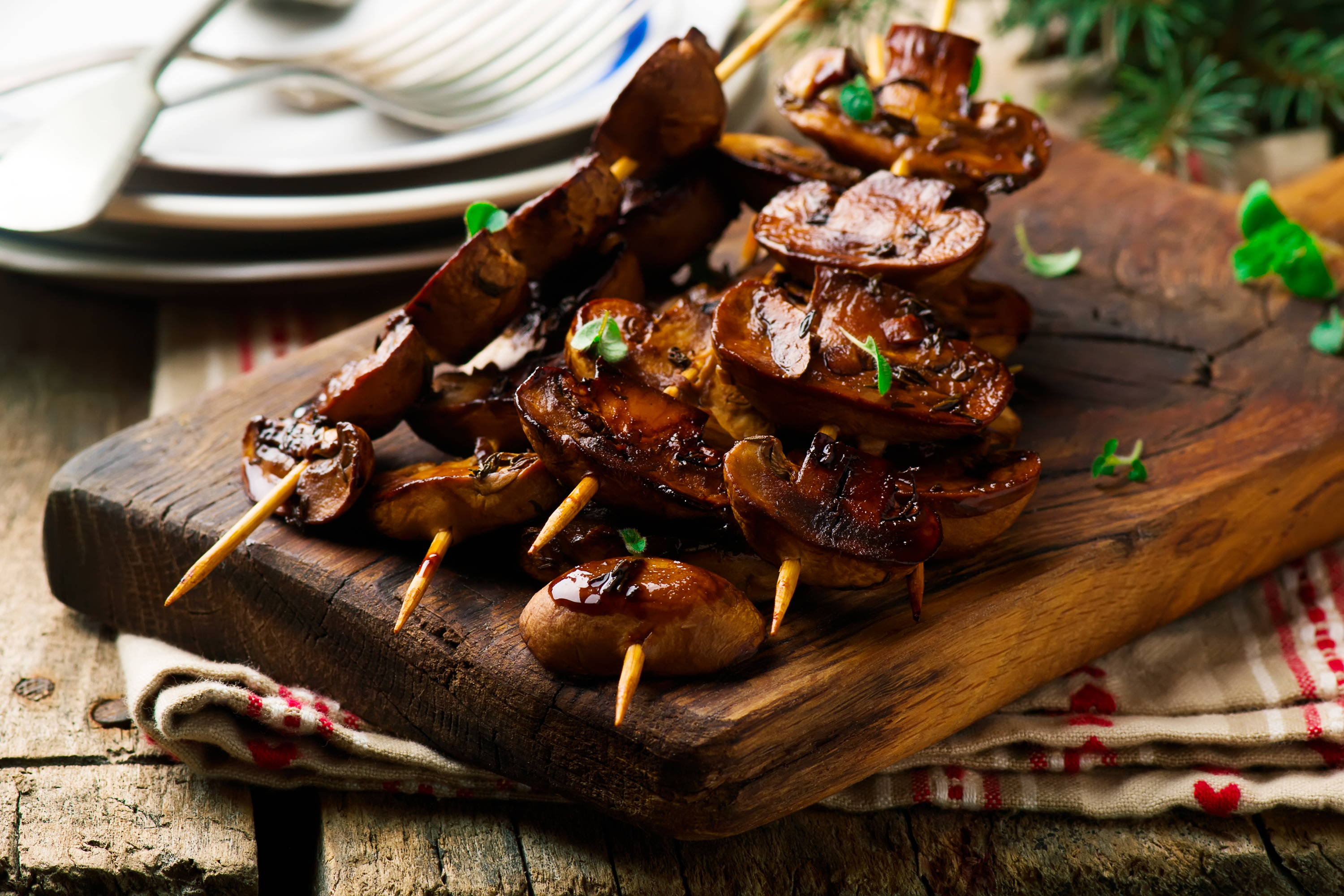 The plant-based industry has skyrocketed over the past decade, with just about every animal-based product now having a vegan alternative. According to the Good Food Institute, in 2020, the retail market for plant-based foods was worth $7 billion, up from $5.5 billion in 2019. Plant-based food dollar sales grew 27 percent between 2019 and 2020, with plant-based food sales growing almost two and a half times faster than total food sales from 2018 to 2020. This increased interest isn't expected to slow down anytime soon, as more people transition to a plant-based diet for health, environmental and ethical reasons. The industry is expected to reach $74.2 billion by 2027.

As interest in plant-based food has grown, so has creativity around how meat alternatives are produced, with mushrooms and mycelium becoming increasingly popular as the main ingredient in many meat substitutes, and for good reason. Mushroom-derived meat replacements are accessible, nutritious, environmentally friendly, and indeed, delicious. We’ve pulled together the latest on these products, along with possible directions for future growth in the industry.

A Brief History of Plant-Based Meats

Plant-based meats may seem like a relatively new phenomenon, but the earliest meat replacement dates back to 1896. This is when John Harvey Kellogg created Nuttose, a meat-like product made from peanuts. He then went on to create the breakfast staple Corn Flakes so that vegetarians could have an alternative to meat and egg-heavy breakfasts.

Over 60 years later, fungi entered the world of meatless meats. In the 1960s the UK was struggling with a food shortage conventional farming could not overcome. Fearing a long-term shortage of protein-rich foods, industrialist J. Arthur Rank set to work searching for an alternative. What he and his team of scientists found was Fusarium venenatum, a nutritious fungi that could be grown quickly and required little space. He then used the fungus to make a chicken-like meat replacement which would become the first product released by Quorn.

In 1981, the first veggie burger was created by a man from Oregon named Paul Wenner. He made the patty from leftover vegetable scraps and rice pilaf. His invention went on to be known as the Gardenburger. Quorn and Gardenburger were just the beginning of the meatless meat movement. 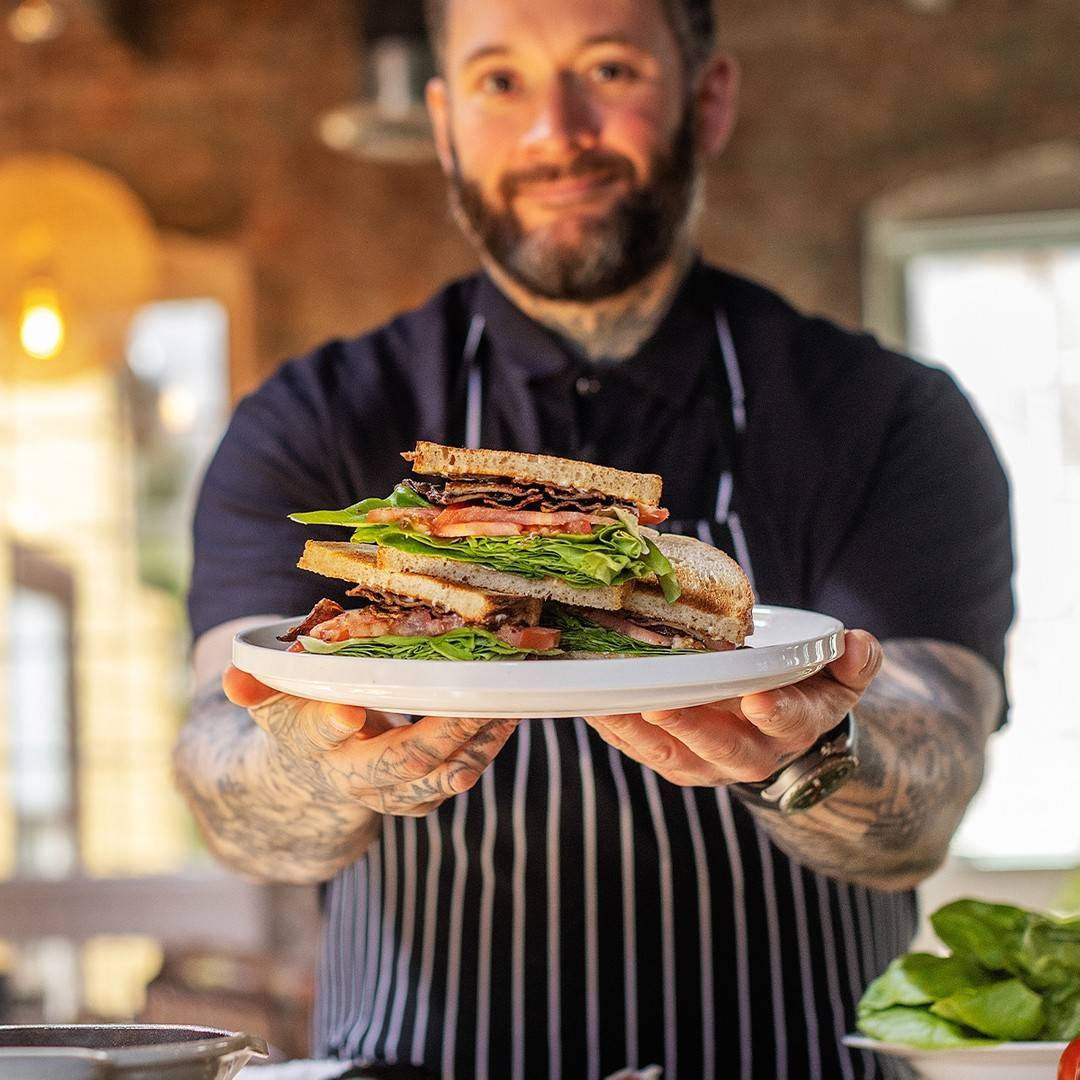 BLTs made with mushroom bacon by MyForest Foods

Tofu, the condensed soy milk product developed in China, and tempeh, the fungi-fermented soybean cake from Indonesia became popular in the United States in the 1980s and 90s and are still enjoyed widely to this day. While both are nutritional and tasty alternatives to meat in their own right, they suffer from being quite different in texture and flavor to real animal meat.

Dozens of other plant-based companies soon followed them bringing everything from meatless roasts, veggie dogs, cheese-less cheese, even ribs and steak.

Though plant-based meats are relatively new to the commercial world, they’ve been around since the beginning of time. A variety of mushrooms naturally have the characteristics of meat, including Beefsteak fungus (Fistulina hepatica) which bears a striking resemblance to beef, and chicken of the woods (Laetiporus sulphureus) which has earned a reputation for having the same texture as chicken. Fungi and mushrooms do appear to be the O.G. meatless meat of the natural world.

Today, people are getting a lot more creative with meatless meat, specifically mycoprotein (protein made from fungi). Ecovative is one business that is working to change the way we view mushrooms. Founded in upstate New York in 2007, they have taken mushroom mycelium and used it to create everyday materials like packaging and clothing. Their latest project, MyForest Foods, is a food tech company that harnesses the power of mycelium to create sustainable, healthy, meatless meats. North Spore has been partnering with Ecovative and supplying spawn for this venture for the last couple of years! 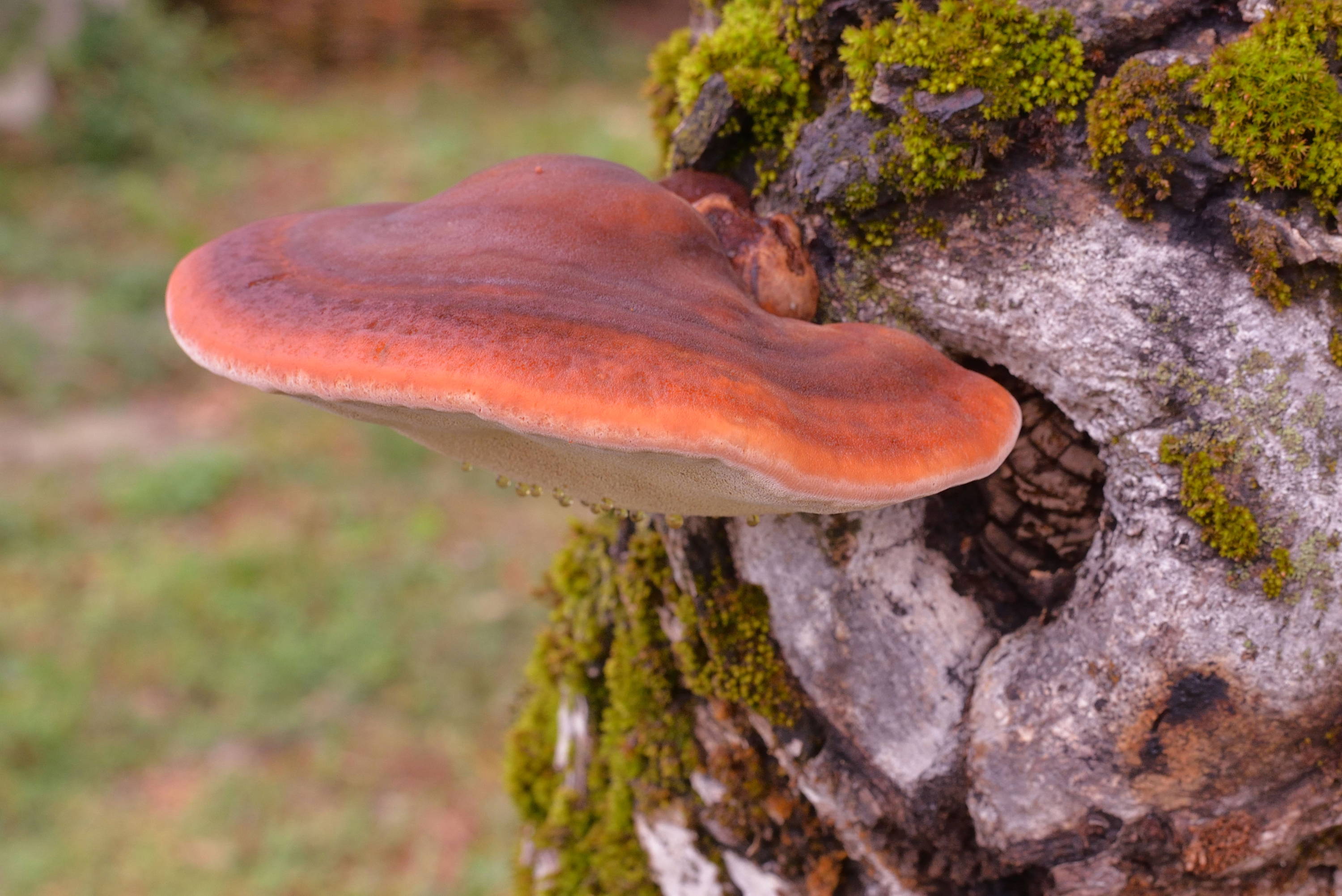 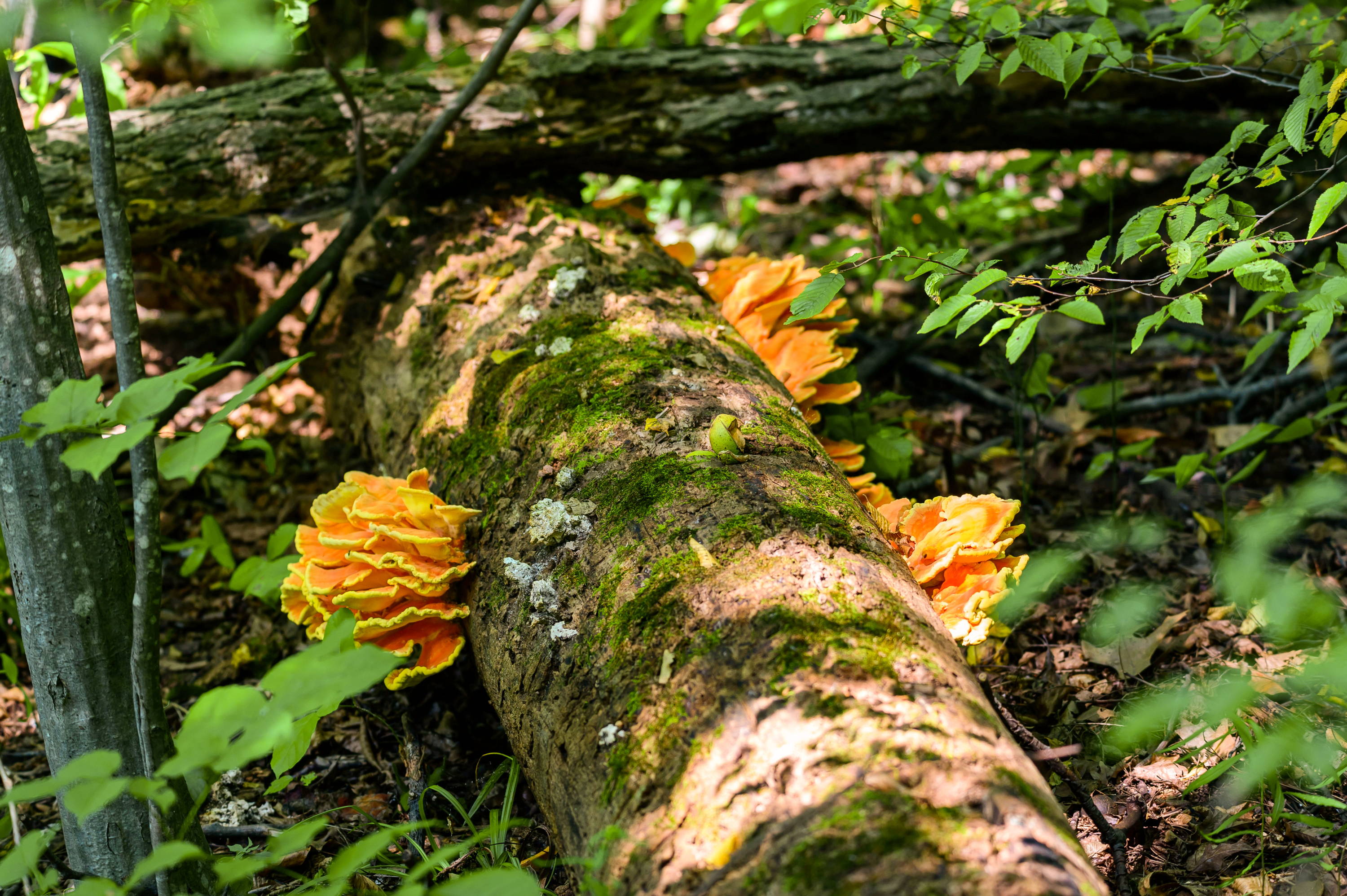 Chicken of the woods (Laetiporus sulphureus)

Animal agriculture puts a heavy strain on our environment. It’s the second-largest contributor to greenhouse gas emissions and the leading cause of deforestation, water and air pollution, and biodiversity loss. 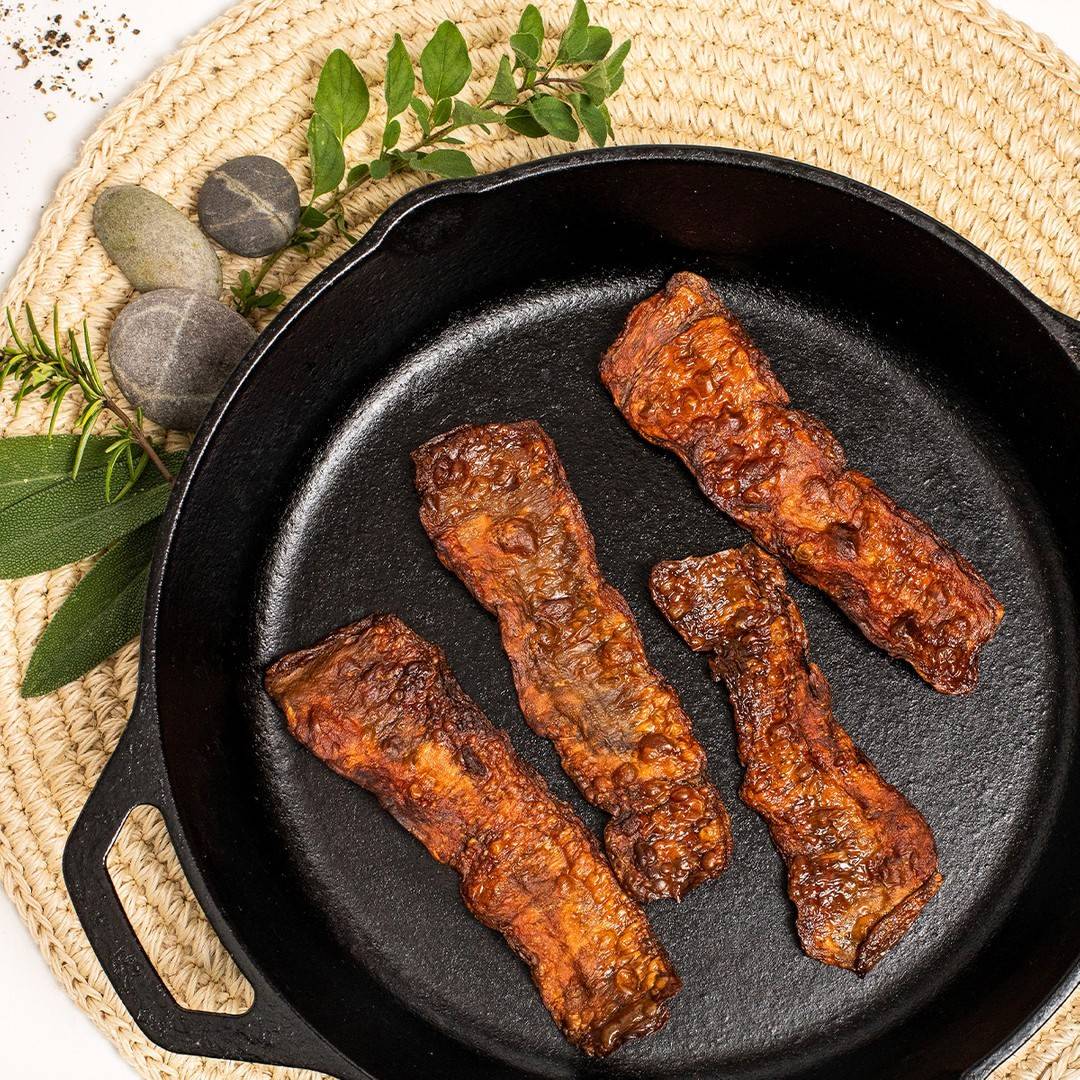 The benefits of a plant-based diet are clear. Eating more plants would require significantly fewer resources and emissions. By some estimates, if everyone shifted to a plant-based diet, we could reduce greenhouse gas emissions by 70% by 2050.

Additionally, mycoprotein requires significantly less space and time. According to MyForest Foods, “One acre can produce one million pounds of protein-rich mycelium meat annually. Compared to raising animals for months on hundreds of acres, the 14-day production process provides meat alternatives to the table faster.” This is possible at home too, on a smaller scale, as mushrooms can be grown with fewer resources, and can be harvested without killing the whole organism.

Nutrition and Flavor of Mushroom Meat

You may be wondering how the flavor and nutritional value of mushrooms stack up against animal meat, and you may be pleasantly surprised.

MyForest Foods calls mycelium a whole food “super ingredient” that has a naturally high nutritional profile. It contains all 9 essential amino acids, making it a complete source of protein. Take for example their new mycoprotein product, MyBacon (Mycelium + Bacon = MyBacon). It has nearly the same amount of protein as pork, with a good source of fiber and no cholesterol.

Mycoprotein and MyBacon are also safe for most people with allergies. MyForest Foods comments, “Our proprietary growth process allows for MyBacon to be allergen-free of all the eight most common allergens and has no gluten, soy, shellfish, eggs, fish, dairy, or nuts.”

Mycoprotein stands strong nutritionally, but what about taste? MyForest Foods says, “If someone didn’t tell you MyBacon was made from mushrooms you would never guess!” MyBacon replicates traditional pork bacon’s nostalgic taste and texture with all the same smoky, salty, and savory qualities. “To say it’s delicious is an understatement!” says MyForest Foods.

The Future of Mushrooms as a Meat Replacement

The demand for sustainable meat alternatives will continue to surge as more people switch to a plant-based diet to better their health, protect the environment, and conserve water, land, and energy. Whether we have thought about it or not, nature has a solution for feeding billions of people with limited resources – fungi. They can be grown in just about any space and with limited resources. An added bonus is that they’re incredibly nutritious and tasty.

It’s exciting to see companies such as MyForest Foods harness the natural power of fungi to potentially sustainably feed the world for years to come. They will be scaling up the production of MyBacon for national distribution in the coming months, which should set an example for industry and consumers alike for how mushrooms can serve as an accessible, nutritious, environmentally friendly, and delicious alternative to animal meat.

“Lifecycle studies that compare pork production to mushroom cultivation show the dramatic potential for impact on sustainability measures like carbon, land use and water. We’re creating a more sustainable and healthy solution for our planet and the population.” – MyForest Foods.

You can even grow your own mushrooms to replace meat in your diet.

How do you like to use mushrooms as a meat replacement? Tell us in the comments below! 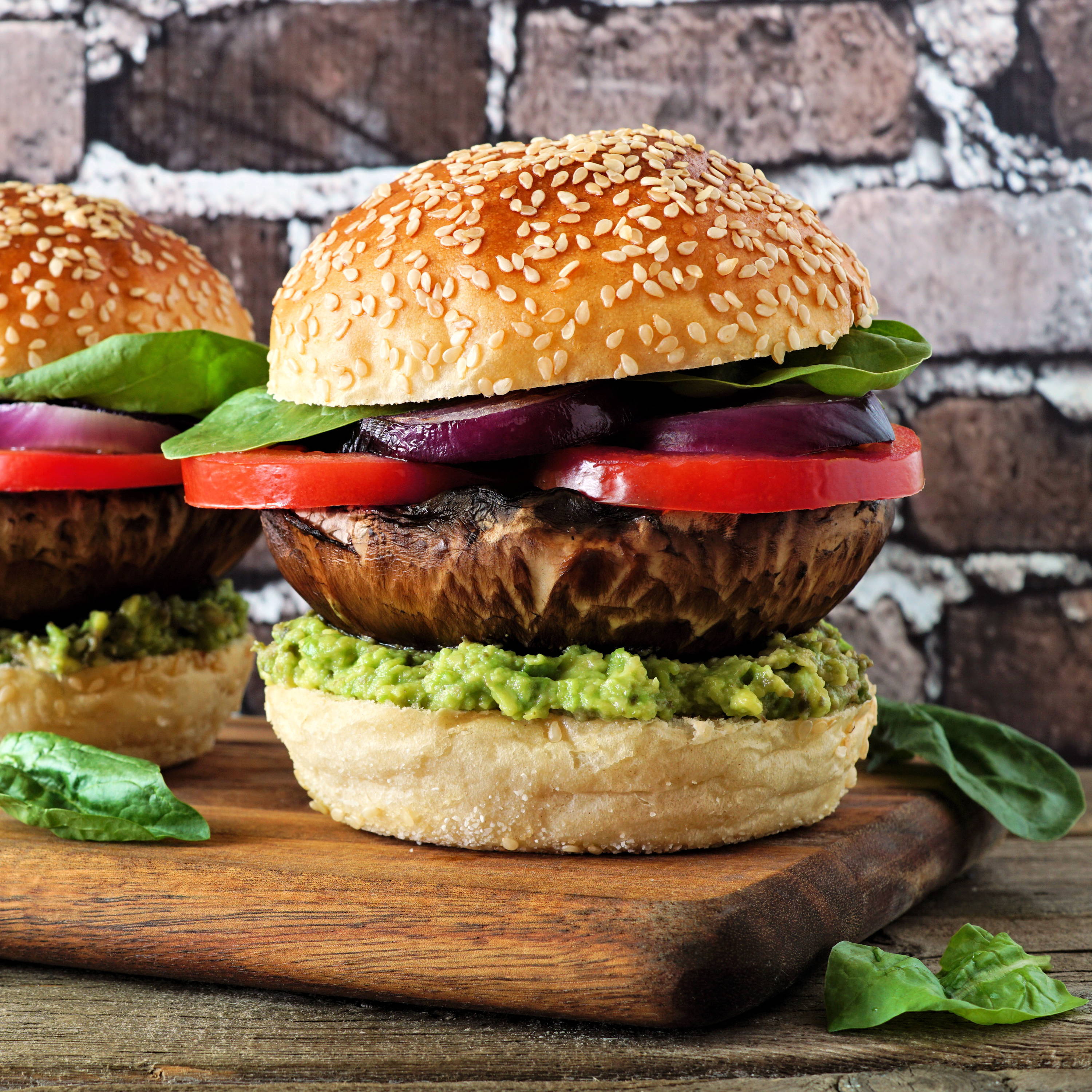 A burger made with a portobello mushroom patty

2 Replies to "Can Fungi Be a Sustainable Meat Replacement?"